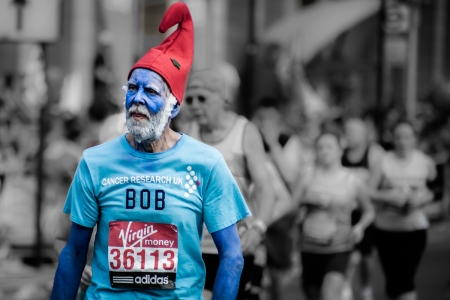 Run for hills I tell you! There’s a yellow orb in the sky! What on Earth…..?! Its emergence spells only doom. The end is nigh! Those weirdo religious freaks were right! It’s here! It’s here! A big ball of yellow sent straight from hell. There, look at it. In the sky! Shining down, bringing warmth and happiness. What are you, oh yellow thing? What do you want from us?! Tell me dear lord. TELL MEEEEEEEEE!!!

What’s that? The sun? That thing in the sky is the sun? Oh, that’s embarrassing – I’ve just looted the local Aldi. I mean, we don’t have the sun anymore. Britain officially signed off the sun in favour of all year-round winter. What is this devilish spring you speak of? You lie! You must be a witch. Burn him! Burn him! BURN HIM!!!!

Actually, turns out, it is the sun. And with it comes soaring temperatures of 14ºC. And of course, with these temperatures soaring so mildly below room temperature, came a panic amongst the people of this country. Yes, fearful that last weekend was the only period of warmish sunshine we would receive for 2013, the people of England took matters in their own hands. Most wore t-shirts. Some wore shorts. Others went for a combination of the two accompanied with flip-flops (these people are also known as Bell-Ends). Of course the more cautious adventurer opted to carry their jacket over their arm, thus – although open to the idea of sunshine – they can swiftly revert back to type once the frivolities come to a shuddering halt. Myself? I opted to wear a jacket – mainly because it was only 14 degrees. But hey, that’s me; I’m a fucking renegade. Like John McClane or Starksy and Hutch. I don’t play by the rules. Ain’t no thing. It’s just how I do police work.

So, word on the street is that spring might actually be here. Just in time for the London Marathon, which, is a huge relief. The Marathon in wintertime would be just plain weird. Like blowing birthday candles out whilst standing on your head. It doesn’t make sense. The cold would make a runner’s preference for wearing a big bear suit look like a justified and wise decision. This cannot happen. EVER.

Oh, the Marathon. A place where smiles, laughter, hugs and support all come together. And now – thanks to some overwhelmingly nice people with hearts as big as houses – we have the added bonus of bomb threats. Hey bomber people, don’t get me wrong, I know this is one of the few calendar days when people folk are so genuinely nice to each other it’s enough to make you sick, but I feel planting a explosive is perhaps a tad too far. I was thinking along the lines of coarse language and a heavy bout of sarcasm as a more appropriate measure. Bombs? Really?

But hey, realistically there haven’t been any threats as such. So panic not. Rather than get paranoid, we should just concentrate on the good things about the marathon and fuck those fuckers who want to fuck it up with their big bags of fucky fuck.

Reasons to love The Marathon:

So, yes, enjoy yourselves. And whisper it quietly; spring might just be here.

Alfie can also be found at THE HUFFINGTON POST