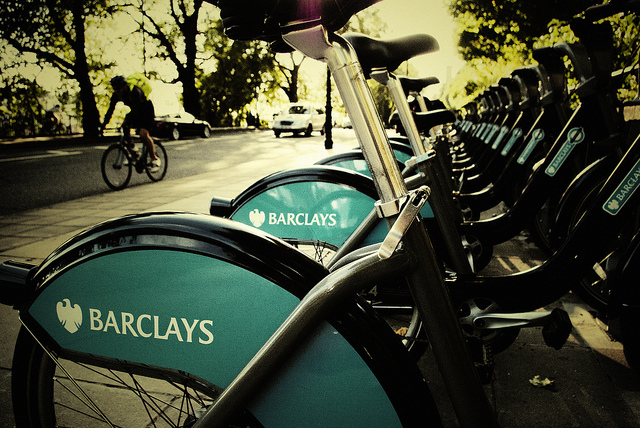 Oops! Almost didn’t get to write a blog this week.  I was writing a short story about a bloke who attacked some kids on a London bus.  Don’t worry, they were little shits.  Oh, and they were playing ‘music’ through their phones.  You see, it’s not all bad.

But speaking of buses and London transport, there’s a new kid in town, and it goes by the name of Barclay’s Cycle Hire.

I registered and received my electronic key over a month ago and have been enjoying the scheme ever since.  Causing havoc and ringing my bell.  But how I remember my first time.

Although slightly disgusted that I would have to become a mobile advert for a bank, I was very excited.  I can’t say I wasn’t nervous when I approached the futuristic looking docking station.  I was.  Apparently you just slide the key in, wait for the green light, and take the bike.  I did as it asked, the light went green, I took the bike.  Easy.  Suddenly I had a bike at my disposal.

There I was wind blowing in my hair, sliding through the streets like the 14 year-old ‘Townie’ I used to be.  All that was missing were my Levi 501s and a Ben Sherman.  I had rediscovered the thrill of cycling and all it took was to slip my electronic key into the slot. No need for the use of bolt-cutters.  That is so last year.

Weaving in and out of stationary traffic, avoiding red lights with the aid of pavements and even letting cars turn with a gentle motion of my hand and a knowing wink.  Maybe things you shouldn’t do.  But like I said , I am again fourteen.  And anyways, fuck you, I’m on a bike.

Along the busy London roads, I was awakening muscles that had seemed to lay dormant.  “Morning boys” I announced to my thighs as they were thrust back into work after an undeserved holiday.  Although a little disgruntled, they had little choice but to shake off the cobwebs and get stuck in.  “It wasn’t like this when you used to walk everywhere.” they huffed at me.  I told them to man-up.  We had places to go.

It seems you only tend notice a certain breed of person when you, yourself, become that breed of person.  When I got specs, I noticed people with specs.  When I had a shave, other men’s skins became all the more visible.  And now, I had started to notice cyclists.  Everywhere.  And as I enjoyed my cycle, I had become aware of a cycling hierarchy.  A certain distain among the cycling ranks.  It seems us hire cyclists are deemed unworthy by the so called ‘Professional’ cyclists.  You know the ones.  They wear lycra and a helmet. They ride a skinny bike.  They’re ready for the call to take part in the Tour de France.  The call never comes.  Instead they speed past on their ultra modern designed-for-speed road bike with 56 gears, tutting at your mere presence on the road. The reason I can’t go any faster is because I only have three gears.  I’m sorry this causes you so much disgust, but you’re just going to have to deal with it.  I could get all the gear. The lycra, the special shoes, the water bottle.  I could, but then, I don’t want to look like a tosser.

My relationship with cars has been a lot more pleasant.  In fact I might go as far to say I enjoy cycling next to the cars. The courtesy shown by drivers has actually surprised me.  Perhaps they see us as the anti-cyclist.  They want a coalition maybe.  Or perhaps they just see a bloke with a leather jacket and a deep scowl who might just kick off if things don’t go his way.

So the cycling’s fun, but inevitably you come to your destination.  All you got to do is find a docking station and hope there’s a space (it’s all sounding a bit Sci-Fi don’t you agree?).  I found one, it had a space, I parked in and walked off.  But something felt strange.  I could have sworn I was cycling a second ago.  I’m pretty sure there was a bike between my legs.  I distinctly remember telling pedestrians to “Get off the fuckin’ road” whilst pedalling.  Oh well, perhaps it was a dream.

Nope, it wasn’t a dream.   This is actually the genius of the scheme.  The hassle of locking your own bike is removed, allowing you more freedom.  The possibilities are endless.  Now you can cycle to Argos, purchase an over-sized item that didn’t really look that big in the catalogue, stumble into a pub, accidentally get drunk, and then stagger home without the responsibility of a two-wheeled friend left chained to a lamp-post.  Genius.

You ride, discard the bike, carry on with your day.  Like it never happened.  A bit like prostitution.  Now tell me that’s not tempting……

A Freelance Writer of scripts, novella and poetry. He likes comedy, truth and weird stuff. View all posts by alfieevers