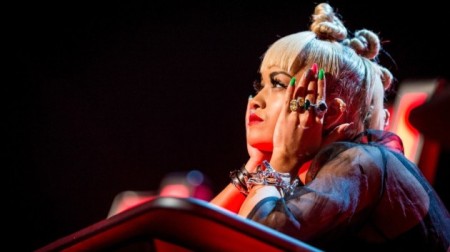 For the past three years, a heavy burden has been resting on me. I have carried a barrelful of lies and deceit, but now, I believe the time is right to be honest with my friends, my family and myself, when I declare that:
MY NAME IS ALFIE EVERS, AND I WATCH THE VOICE UK.
Phew. What a relief. I imagine this is how Ian ‘Hyperactive’ Watkins felt after he ‘came out’. The confusion, the rumours, the lies; it’s no good for anyone. You see, up until this point, it was only my friend Abi who knew about my dirty little secret. The covert texts, the murmured opinions, Abi – herself a professional singer and all-round diva – became my confidant. Confused as she was that a misanthropic, apathetic, all-round people-hating fellow such as myself would enthusiastically (albeit secretly) take up The Voice viewing mantle, I knew I was in safe hands. I was justified in entrusting Abi to keep her word. After all, I was Best Man at her wedding; I’m godparent to her daughter; we share a common love for dark chocolate digestives; and most crucially, I threatened to sell her kids on ebay if she told anyone. At least now Abi, we can both rest easy.

For those who perhaps live in a utopian world where the whole country doesn’t think they can ‘make it’ as a singer, and don’t know what The Voice is; The Voice is the BBC’s supposedly more credible Butlin’s-style singing contest. More credible for the reasons that there are: 1) No ad breaks; 2) The judges aren’t convicted thugs; 3) They have delightful turny-spinny chairs that turn and spin in a turny-spinny sort of way.
But for all those wonderful reasons, I am absolutely lost as to why, by the power of Greyskull, I watch it. I really am. The Voice UK is, without doubt, absolute toilet, and yet, somehow I’ve just accepted it into my life. I watch as it flouts in front of my face like some disease-ridden exotic dancer, choosing to ignore the stench and scabs, propelled only by the knowledge that without this dance, I’m just sitting on a chair in a cold vacuous space. The monstrosity distracts me from the emptiness of my own life. Plus, if I watch long enough, I might get to see some tit.

So I watch. Sniggering to myself, safe in the knowledge that every contestant who enters will definitely NOT have a singing career at the end of it. In terms of producing top singing talent for the world to enjoy, The Voice has exactly a 0.00% success rate. It really is the kiss of death to any potential music career. Unless you’re a judge of course, in which case the show serves as an hour-long advert to propel his or her own nonsense. Well, I say an ‘hour-long’, but because I watch it on catch-up, the show lasts only ten minutes once I’ve fast-forwarded through all the chat. So much chat. My, oh my, they love a chat. Too much chat. Chat from the contestants, chat from the judges, chat from family members. Just chat, chat, and chat. ‘Get ’em on, get ’em off’, should be the mantra. I couldn’t give a camel’s steaming turd that Julie from Wales gave up a singing five years ago to ‘have a family’. If I’m not mistaken, it’s called ‘The Voice’, not ‘The Sob Story ‘. Terry from Durham, I’m sorry you had to put a music career on hold because you killed your own family and went on the run from police with your evil boyfriend ‘Evil Steve’, but that doesn’t make your voice sound any sweeter. Now take your broken wings Mister (Mister) and bother someone else with your nonsense dreams of grandeur. Freak.

Never before with a show have I shouted ‘Fuck Off!’ at the screen at so many intervals. I’d say at least 75% of the time. Especially when the camera cuts to the excessively emotional family backstage, bouncing around like chimpanzees with dildos stuck up their arses, dispelling any dignity they may have ever shared amongst them. Perhaps someone should tell them that getting through round 1 of a talent contest is not a life-changing experience – trust me, I did exactly that at Butlin’s in 1987. My Michael Jackson dance routine was pipped at the post by ‘The Boy Who Could do Handstands’. That end of rainbow pot of gold was certainly not present. Something these families need to realise. I mean, Jeez, imagine what they’d be like if their family member actually achieved something worthwhile in life, like opening a jar of jam or having a grip on reality? Scary stuff indeed.

I often fantasise as to what would happen if I were to appear on the show. Obviously for my storyline bit, I’d say I was a sex worker, forced to sell my body (mouth) to pay the bills of the 13 street children I had fostered. Backstage I’d definitely hit on Emma ‘Ridiculously-Beautiful-Why-The-Fuck-Did-She-Marry-Some-Bloke-From-McBusted’ Willis, performing for her my dance routine circa Butlin’s 1987 – always a winner (apart from 1987) – before heading out front and performing Sham69’s ‘Hurry Up Harry’. Watching me would not be my family; instead I think I’d muster up as many hobos as possible. Hopefully they’d sway with abhorrent levels of intoxication and puke running down their chins, their worn faces would stare blanklessly into the abyss as Emma tries her best to garner some sort of joy or support. She fails miserably and horrifically there are no tears. I exit the stage, expose my penis to the booing audience, whilst simultaneously flipping the double bird and telling them to ‘suck it’. My music career is over, but let’s face it, it was already over the moment I applied to go on The Voice.

This article was first published in The Huffington Post

2 thoughts on “The Voice is Absolute Toilet, But For Some Reason I Watch it.”